In a recent project, I had to find out which of the workflows in the site collection were made with SharePoint Designer. I did a recursive code that checked in all SPList instances in every SPWeb for the following combination:

I also checked to see if the workflow association was active (SPWorkflowAssociation.Enabled == true) because the previous versions of the SPD workflows are also stored as associations, but they are disabled.

I hope this little snippet can help you in similar cases. Have a nice coding!

You have a standard MOSS 2007 Approval or Collect Feedback workflow configured in a document library or a content type. You try to:

SharePoint displays “This form has been closed” or “The specified form cannot be found” trying to display the form. Sometimes it shows the InfoPath Forms Service message box with the same information.

The standard out-of-the-box workflows have been messed up after their creation, by unknown causes.

Thanks to Patrik Luca on MSDN Forums.

Acting on the feedback I received, I fixed some bugs in my User Profile related Activities for SharePoint Designer. I changed the version number to reflect it. Now it should run and register without errors (hopefully). 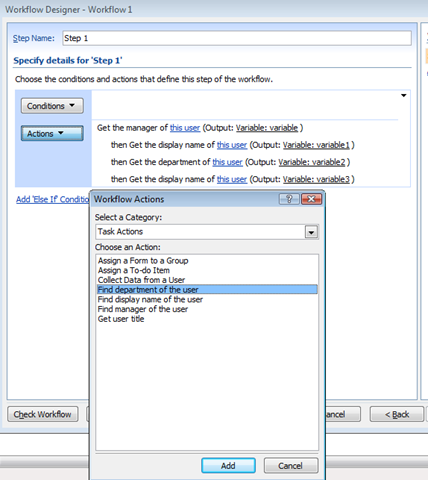 UPDATED 04/07/2012: I had issues with SkyDrive and lost the files but the WSP file has been retrieved by one of the previous downloaders. The link is fixed.
UPDATED 28/08/2008: I released an updated version (0.2.0) that solves a previous bug when choosing the action in SharePoint Designer didn’t add the action to the workflow actions list. Please download the new version if you need to use these activities. The installation instructions have also been revised.
UPDATED 07/07/2008: I finally corrected the issue with the feature activation and web.config modifications. The files for download are updated.
I finally decided to post some useful code for the SharePoint community. I present you the “User Profile related SharePoint Designer Activities“. It’s a solution package (.WSP file) that contains four SPD actions (workflow activities) for the SharePoint Designer workflows. This package is only for MOSS 2007 installations. It will not work on WSS 3.0 machines. (I’m preparing a similar package for WSS).
The available actions are: HOW TO GET IT

The WSP package is easy to install:

I’d appreciate any comments about these actions/activities. Feel free to use the comments feature of this post.

I release this code under the Ms-PL (Microsoft Public Licence). 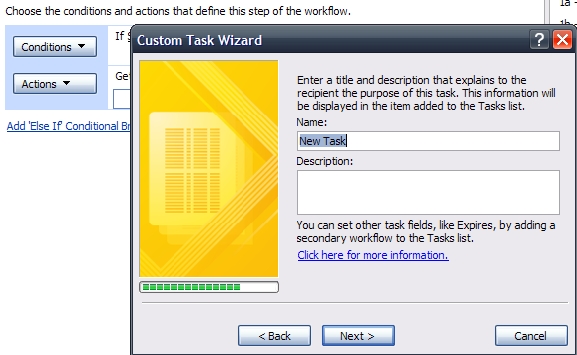 I’m annoyed by many little details of the SharePoint Designer Workflow editor, but the main one is that it profligates in the creation of content types. It creates one content type for any custom form that you create when collecting data from a task. Moreover, it doesn’t give you the chance to reuse an existing type….every new task is a new content type in the Tasks list. However, you CAN reuse existing content type for the Tasks list. You just have to create the first form as usual and then create a second form with a easy-to-find name such as “DUMMY”. Then, a little bit of manual work follows: