I’ve been pulling my (scarce) hair when suddenly the Developer Tools in IE8 didn’t appear as expected, on one day. The taskbar in Windows showed the tools’ window but there were none to be seen.

Luckily, a quick Google search unshoveled this StackOverflow question. The reason was that the tools were off-screen.

It was just a matter of right-clicking the taskbar tools’ window, choosing “Maximize” and pin the tools back to the main IE8 screen. 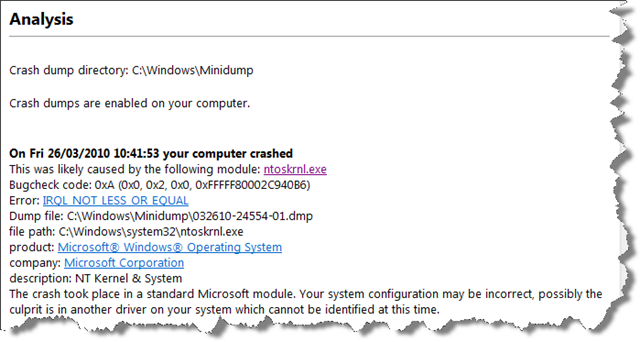 I have a shiny new Windows 7 Ultimate 64-bit edition installed on my Dell laptop but in the last month I’ve been suffering intermittent BSOD errors (the infamous Windows’ Blue Screens of Death). They just seem to happen randomly every few days.

First I tried the Windows online solution check included in Windows 7, but found nothing.

Then I downloaded a free tool called WhoCrashed. It showed me that the error was inside the standard Windows NTOSKRNL.EXE module. I opened a crash dump file generated by Windows in Minidump folder. I run a deep analysis with !analyze –v option And I found the culprit: the ShrewSoft VPN Client I had installed a month ago! It seems that the last stable version has issues with Windows 7 x64 and sometimes causes BSOD. I’ve downloaded the latest beta of the client and the problem seems gone.

I installed the ShrewSoft VPN client because it’s free and it works (well, mainly) with Windows 7 in 64-bit mode, unlike Cisco VPN client that does not. There is an alternative client from NCP, but it costs about 120 EUR.