Few days ago I used NDepend tool to analyze the code of one of our bigger projects in Sogeti. Here are my thoughts on the tool.

NDepend is a static dependency analyzer tool. It scans your compiled code, the PDBs and the source code and produces a “map” of your code dependencies, metrics and structures. It has been around for several years now, and it has kept beeing better in every new edition.

The default view of NDepend is the so-called “Report” that highlights all the potential issues with your code. It gives you a trove of information to optimize your code, in a HTML format that’s easy to share. The report contains the summary of all the main features of the tool: rule violations, dependency cycles, complex code and so on. 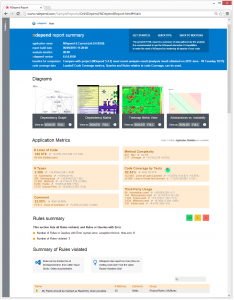 The dependency graph is easy to grasp but it can only be meaningfully used with a handful of classes and namespaces. It quickly becomes a mess with more than a couple of dozen objects.

The dependency matrix is a much more powerful tool. It can be used to spot dependency cycles, infrastructure classes, “god” classes, cohesion and coupling and so on. However, it’s not as intuitive to analyze as the graph, it takes some time playing with it to grasp the information without consulting the help windows. 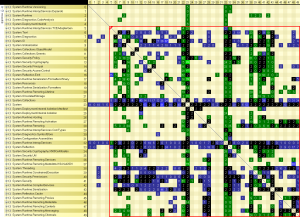 NDepend has a full set of code complexity and maintainibility rules. It can quickly highlight the most important issues so that you can concentrate on fixing the most critical parts of your code. 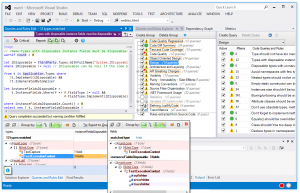 But it’s just the surface of it. NDepend has a full-blown language called CQLinq, akin to SQL, that allows you to query your code. You can find classes that have high coupling, methods that are too complex, nested structures in the code and a myriad of other code patterns. 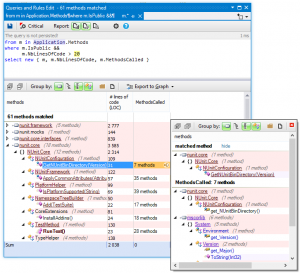 In my opinion, NDepend is an invaluable tool if you’re concerned about your code quality (and you should be). It takes some time to grasp and master all the power of it, as it can be an overwhelming experience for a first-time user, but it’s a time well invested.

Thanks to Patrick Smacchia (the main force behind NDepend) for the NDepend license for MVPs, that allowed me to fully evaluate the tool.