This was my last session at the SharePoint Conference 2009 in Las Vegas. Tomorrow I fly back to the real world 🙁 At least, I splashed up a little at the Mandalay Bay Beach Wave Pool.

This session was very instructive, too. It versed about how to migrate existing SharePoint 2007 code and projects into SharePoint 2010 world. The presenter was a New Zealand guy called Chris JT Auld, from Intergen Limited. Here are my notes on that:

VS2010 template (a .VSIX file) allow import VSEWSS 1.1 and after into VS2010. It recreates the project structure only. You should do some refactoring around the solution structure, as VSEWSS had a 1:1 feature-artifact relation. New Feature Designer is more flexible that the VSEWSS, it now allows you to have more artifacts in a single feature.

There are several issues that may arise:

Many APIs have been deprecated. In most cases it will give you a warning during the recompilation but it should work. Examples: SPFarm.Create now uses SPFarm.Create(passphrase), SPVirtualServer is deprecated by SPWebApplication. A Reflector add-in will be made by Chris to scan an assembly for deprecated code.

There have been numerous improvements in the WSP solution upgrade process:

A complete whitepaper was released on Monday, called "Redeploying Customizations and Solutions in SharePoint Foundation 2010 and SharePoint Server 2010". It’s avaliable on http://msdn.microsoft.com/en-us/library/ee662217%28office.14%29.aspx

This session was dear to my heart, as the end-user adoption is really a tough thing to achieve. The session was presented by Scott Jamison of Jornata.

Here are my notes on the session:

It’s essential to have an adoption plan

Take the "What’s in it for me?" factor into account

Must-have elements in the adoption strategy

Must Have Resources (free)

SharePoint Buzz Kit from Microsoft (will be updated for SharePoint 2010)
http://sharepoint.microsoft.com/rampup/sharepoint/Pages/buzzkit.aspx

SharePoint Training Kit (will be updated for SharePoint 2010)
http://www.microsoft.com/downloads/details.aspx?FamilyId=7BB3A2A3-6A9F-49F4-84E8-FF3FB71046DF&displaylang=en

Get the Point Blog
http://sharepoint.microsoft.com/blogs/GetThePoint/default.aspx

It’s very comprehensive and outlines all the features that SharePoint Server 2010 includes.

On this second day of SharePoint Conference in Las Vegas, I attended two sessions that were specific on document management improvements in SharePoint 2010:

The main takeaways from these two session are these:

There are 4 main approaches on how to use these settings in Document Management, depending on the scale of the document repository that we need:

Office 2010 can interrogate SharePoint Metadata Service in background, which allows the user to create new document based on the latest content type document templates.

Word Automation Services are also available to automatize Office document conversion (into PDF, XPS and so on), printing and document composition. 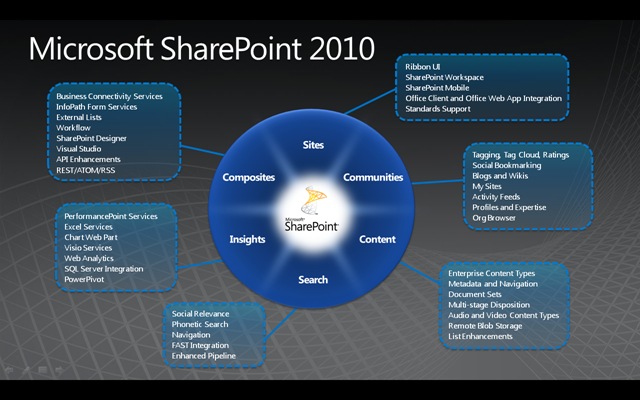 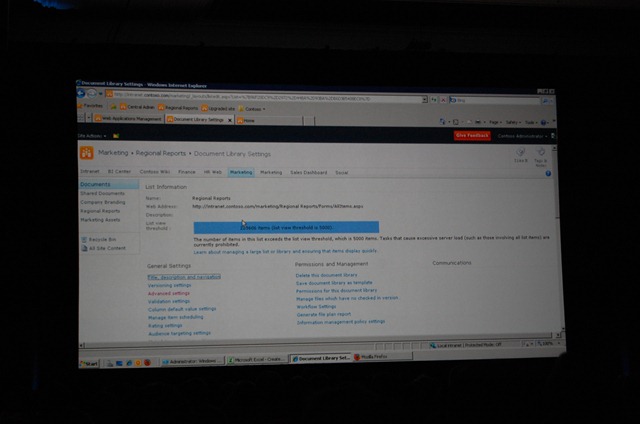 This session was delivered by Paul Andrews, Microsoft Technical Product Manager for SharePoint. It was really “techie” stuff, but summarized enough to squeeze into 75 minutes.

Here are my notes from the session:

I can’t wait to try these new improvements on my own!!! However, we will still have to wait until November to get our hands on the Beta version binaries. 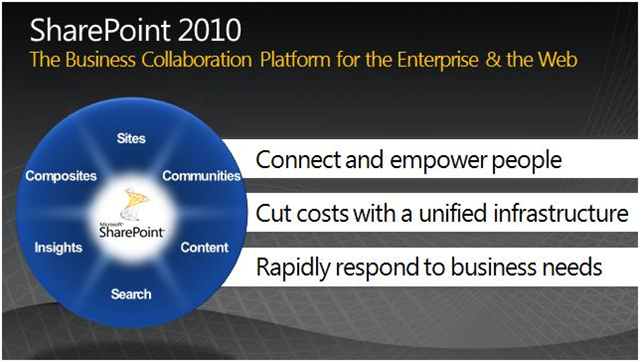 I’ll summarize the main points of the keynote. Steve Ballmer during the keynote FAST Search for SharePoint 2010 with rich and dynamic user interface SharePoint 2010 Licensing, both on-premise and on-cloud There were funny moments during the keynote speech, I liked the joke about the “fruit company” (Apple, of course) when referring to multibrowser capabilities of SP2010. 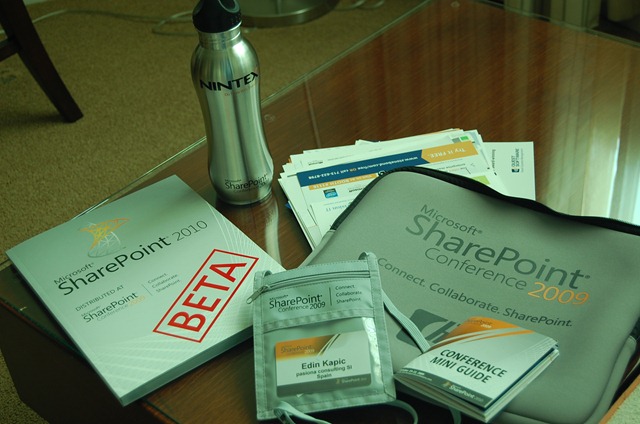 I arrived yesterday evening to Las Vegas. Today I did the registration process and I strolled The Las Vegas Strip (officially called Las Vegas Boulevard), taking photos of the hotels (what else is there?). You can check them on my Facebook profile.

In the registration bag I found the following:

Here’s a photo of it all: More news later this night, after the SharePint Event. 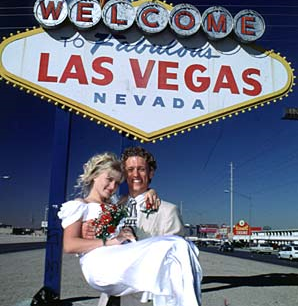 Yes, I’ll be attending the SharePoint Conference 2009 (SPC09) next week in Las Vegas, Nevada. I will leave this Saturday for Las Vegas (via JFK) and I hope to arrive Saturday afternoon.

This conference is going to be HUGE!!! More than 7000 participants! More than 15 simultaneous sessions for every slot!! This makes the choice of which sessions to attend a very challenging task indeed. I will inform regularly about the conference at this blog and on my Twitter page. (Yes, I succumbed to Twitter SharePoint takeover, mainly thanks to Joel’s positive comments).

Of course, I’ll post the MOST embarassing photos of the SharePint squad meeting at the Mandalay Bay Casino Lounge. No doubt!

In the spare time (is there any?), I plan to visit the Las Vegas Museum of Atomic Testing, it has certainly piqued my curiosity.