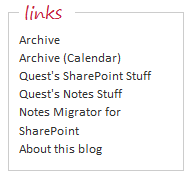 Although I’m much more involved with CKS:IEE and CKS:CIE editions of Community Kit for SharePoint (CKS), I’ve been playing lately with CKS:EBE (Enhanced Blog Edition). It wraps around the standard SharePoint blog site and rewrites the standard HTML with its own Modular Theme Framework (handled by a custom HttpHandler) and adds a lot of other goodies.

In a web site we were building internally in the company I work for, we use CKS:EBE for a community site. We wanted to replace the standard links list with clickable image banners. This is a view of a standard Links list in CKS:EBE (captured from www.notes2sharepoing.org blog): What we did was to add a custom Hyperlink column to the Links list (Vínculos in Spanish), called PhotoURL. We uploaded the banners to the Media document library provided by the CKS:EBE. Then, we added the correct URLs to each of the links entries.

Then, we replaced the following line in Links.xsl for the current theme:

The result is shown below: Finally, an independent association for all of us SharePointers is born. ISPA (International SharePoint Professionals Association) has launched few days ago and is available at http://www.sharepointpros.org/.

Right now it consists of four board members:

and many Regional Evangelists (all MVPs)

I hope it will grow steadily and become an umbrella for the community of SharePoint professionals that is rising. 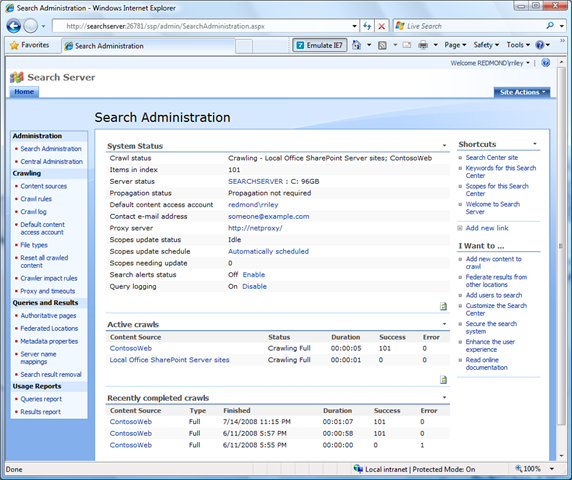 (a new buzzword to learn, together with “hotfix”, “patch”, “service pack” and “update”.)

Well, the thing is that the good folks at Microsoft have been working hard to fix the most annoying issues with SharePoint and to retrofit the new features they have developed. And the result is that we have two (actually more than two) infrastructure updates available for download:

This update adds Federated Search capabilities to MOSS search. It also adds a new streamlined “Search Administration” page. The next good news is that Content Deployment is finally largely rewritten and this fixed up a lot of intermittent errors. Yesterday SharePoint greeted me with this error message when I tried to create a new site inside a site collection:

I examined the ULS logs of the SharePoint server and I noticed that it tried to open the new web by name and it failed. The reason was a faulty Alternate Access Mappings entry, as shown here:

Exception type: System.IO.FileNotFoundException
Message: The Web application at http://whatever.domain.com/newsite could not be
found. Verify that you have typed the URL correctly. If the URL should be serving
existing content, the system administrator may need to add a new request URL
mapping to the intended application.